A unique collection of unique voices, each archives exists to capture, preserve, and share firsthand accounts of history. Among the most iconic of these windows into the past is the daily journal. Constructed day by day, year after year, journals are to manuscripts as time-lapse images are to photography. Preserved amidst the many daily accounts at the History Center’s Detre Library and Archives are the J. W. Lynch Journals.

Born on April 19, 1862, John. W. Lynch began his lifelong career in the steamboat industry as a laborer for the Joseph Walton & Co. in Elizabeth, Pa. In 1898, Lynch began work at the Elizabeth Marine Ways, a company that specialized in steamboat construction and repair.

Illustrations of local foliage by J.W.Lynch, 1926.

From 1898 to 1925, Lynch tirelessly wove a daily record of his work on various steamboats at the Elizabeth Marine Ways. Chronicling the names of the vessels as well as the men working alongside him, Lynch provides an insider’s look into the Western Pennsylvania steamboat industry at the turn of the 20th Century.

Beyond serving as a daily log of steamboat construction and repair, Lynch’s journal entries are also peppered with anecdotes that document labor history in the local steamboat industry. One intriguing example of this can be found in Lynch’s journals in November 1903. Upon returning to work after a severe chest cold, Lynch records the following: “Strike on at the Ways over an order issued by [Superintendent] Wm Wiegel that we could not wear gloves altho cold and windy. Down to 22° above and we are still out on Nov-14 1903.” Not a man to mince words, Lynch’s next entry definitively, yet triumphantly reveals the resolution of the labor dispute: “Back to work Monday Nov 23-1903 to wear anything we want.”

Lynch also often took care to record the intersection of historical events with his daily life in Elizabeth. Lynch’s remarks affirm the far-reaching effects of the Johnstown Flood, Prohibition, the St. Patrick’s Day Flood, and both World Wars. As for the Pittsburgh innovation of Daylight Savings Time, Lynch had only this to say: “Sun. April 30- 33 . . . Has been a most lovely Day, and the first Day of so called Daylight savings, one of the worst impositions ever perpetuated on the working People. Turning the Clocks ahead one hour deprives us of the best hour of the Morning for sleep. The Pittsburgh Political gang have done this.”

Even following his retirement from the steamboat industry in 1925, Lynch’s journal entries continue in similar cadence. However, sprinkled in the journal entries are signs of Lynch’s new-found leisure.  In 1940, Lynch traveled to Forbes Field to catch a Pirates game. “I attended a game of Base Ball last Night. Pittsburgh and Cincinatta [sic]. I was in a new World, just Daylight at Night. Wonderful. Pitts 4- Cinci 2. Walters and Lombardi Butcher and Lopez. 35 thousand were there. A most wonderful sight[.] getting out took fully 1 hr. Home about 1 a.m. with John Cox. 42,254 were there.” It seems trying to make a quick getaway after attending a Pirates game has long been a challenge. 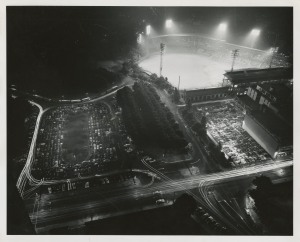 Taken together, the daily entries of J. W.Lynch’s journal preserve and reflect an array of personal and professional experiences that have a place in the social history of Western Pennsylvania. For more information on J. W. Lynch and his handwritten journals, we invite you to review the collection’s finding aid.

In addition, Jay Mohney (great-grandson of Lynch) has created a website based on the journals that further documents Lynch’s career in the steamboat industry. This website includes digital scans of the journals in this collection. In addition, this website also contains an inventory of names mentioned by Lynch in his journals. These names include fellow coworkers, steamboat owners, and local residents of Elizabeth, Pa. The URL to this website is http://freepages.history.rootsweb.ancestry.com/~jmohney/index.htm

This entry was posted in Business and Industry, Rivers, Steamboats. Bookmark the permalink.